Starting off my 2011 trip through southeast Mexico, I began a day at the Ferrosur yard in Irolo Mexicano, Hidalgo hoping to catch the local that runs north to Linea H and Honey.  I've always wanted to photograph the train passing underneath the impressive Arcos del Padre Tembleque on that line.  However, when I arrived at the yard, I found a set of engines switching, building a train to depart southward.  As luck would have it, they were instead taking a long cut of loaded grain hoppers to the massive grain elevators on Linea HB near Calpulalpan.  This is the former narrow gauge Ferrocarril Interoceánico line to Puebla. 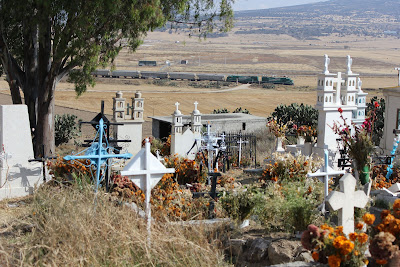 As seen from a cemetery above Irolo, the local departs onto the branchline.  Ferrosur's Linea S mainline to the east coast  is visible above the train.