Completed by the Southern Pacific of Mexico, the former Ferrocarril del Pacifico runs from the Arizona border to Guadalajara, Jalisco. Now part of Ferromex's División Hermosillo, the line is a venerable secondary mainline. The lightly traveled northern end is made of much weed covered jointed rail. Generally, the line is busier farther to the south. 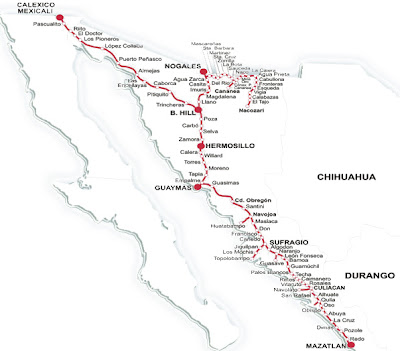 Empalme
Empalme serves as a division point and the hub of Ferromex operations in Sonora. From here, crews work north to Nogales and Benjamín Hill (trains destined to Mexicali), west to the port of Guyamas, and south to Sufragio. Virtually all trains terminate here and are reswitched. 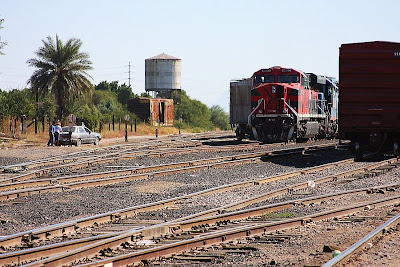 After the northbound D SFEM (Directo Sufragio-Empalme) has arrived in Empalme Yard, the crew is getting a ride to the depot. 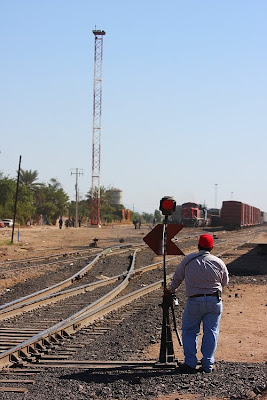 A switchman is waiting for the road locomotives from the DSFEM to pull onto the mainline before backing into the engine service tracks. 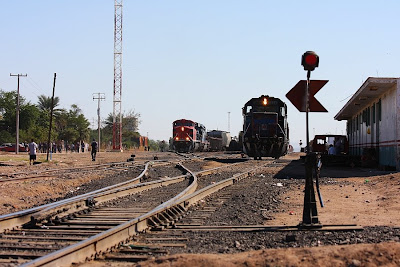 The yard switcher is running down the mainline in order to switch out the inbound cars. The road locomotives will pull high on the mainline allowing the switcher to duck into the yard. 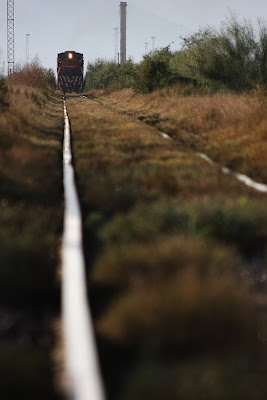 A DEMSF is approaching the end of yard limits while departing Empalme southbound. The train is being pulled by a single Super 7, running long-hood forward. 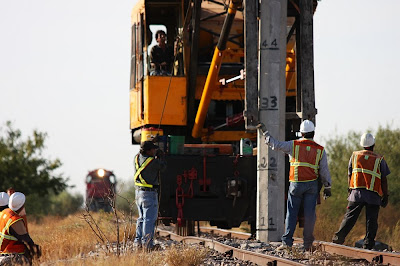 South of Empalme, a piledriver is driving a pile between the rails while the locomotive waits in the distance. 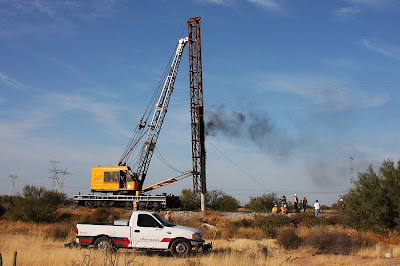 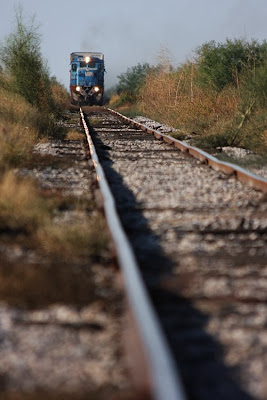 At Guasimas, a southbound manifest train trundles down the mainline. 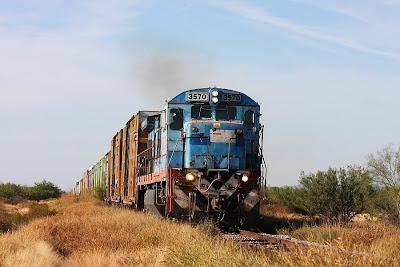 A single C30-7 is pulling the southbound as it approaches Vicam. 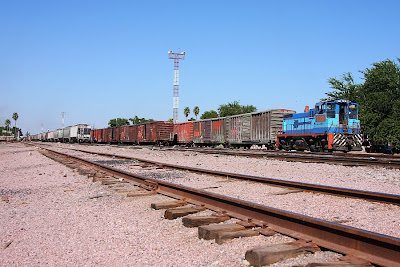 The small yard at Ciudad Obregón employs two yard jobs during the day. The jobs work each end of the yard, and serve the local industries to the north and south. Here, an MP15AC switches at the south end of the yard while the other job is visible in the distace. 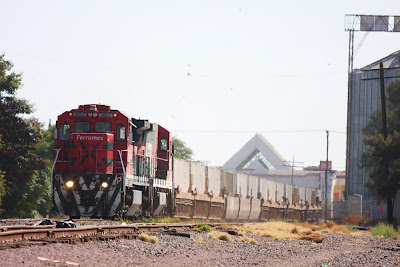 The yard jobs have both cleared the main track after the dispatcher notified them that the "Pami" is approaching. The D PAMI (Directo Pantaco-Mexicali) is the hotshot of the division, rushing containers and trailers northward to Mexicali. Most of the containers are bound to maquiladoras in Tijuana and Mexicali. There are standing orders that this unscheduled train is not to stop for more than two hours after leaving Guadalajara. Here it is seen cruising through the yard limits at Obregón. 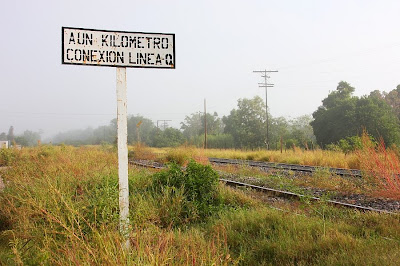 After crossing the Rio Fuerte in northern Sinaloa, the FC Pacifico once crossed the FC Chihuahua al Pacifico at grade in San Blas. At some point after the consolodation of both lines into NdeM, the parallel lines were combined by laying double track through to Sufragio. At San Blas, a sign warns northbound crews that the connection with Linea Q (to the Copper Canyon) is ahead one kilometer. 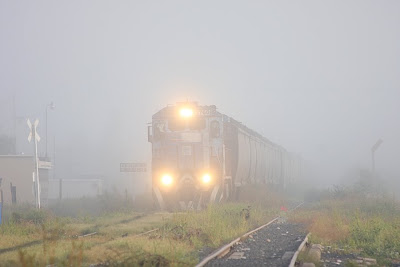 On the morning of Día de Los Muertos, a southbound grain train emerges from the fog while entering the town of San Blas. Along the banks of the Rio Fuerte and at the foot hills of the Sierra Madre, heavy fog often fills this valley in the mornings. 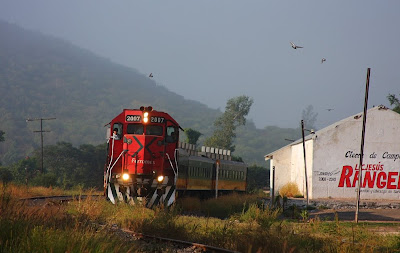 The northbound Chepe passes the old station at San Blas. 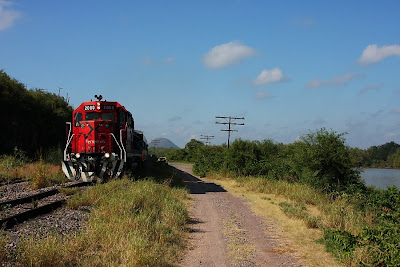 Running 1 hour behind the Chepe, the second class passenger train is pulling through Yard Limits between Sufragio and San Blas. The Rio Fuerte is visible to the right.


Sufragio
Sufragio is Ferromex's main hub in northwestern Mexico. Manifest trains from Guadalajara arrive here, and are switched out for various destinaltions. Trains then depart northward to Empalme and Chihuahua while locals run to Los Mochis, the port of Topolobampo and Navojoa. 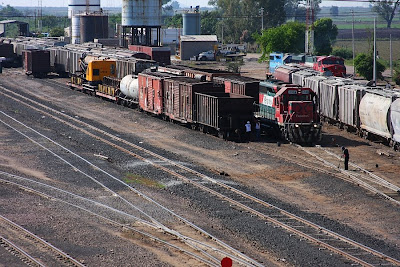 An SD40 switches on the north end of Sufragio yard while a maintainence crew services switches. 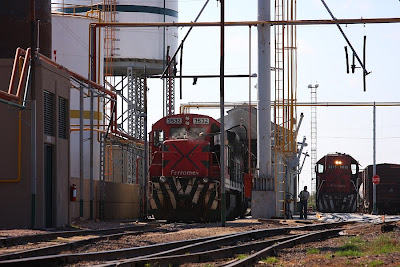 In the morning, a C30-7 receives sand in the Sufragio roundhouse while the distant high-nose GP38-2 is warming up for the local (turno) to Los Mochis. Ferromex's División Hermosillo is a good spot to find older locomotives. While MP15's, High-nosed GP38's and C30-7's are difficult to find on other parts of the Ferromex system, they can often be found working in everyday service on the division.


South of Sufragio, the FC Pacifico passes through the agricultural coastal plains toward Culiacán. At a point south of Culiacán, the Sierra Madre become steep and hug the coast, so the tracks turn downhill and run toward the coastline. For about 40 miles north of Mazatlán, the tracks run along beaches and through coastal towns much as the SP Coast Line and the ATSF Surfline (although a much more desolate area). 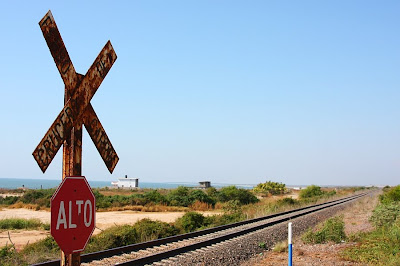 Near La Cruz siding, the tracks meet the coastline. 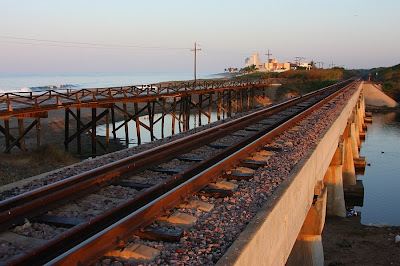 Through most of this area, the line is close to the quiet beaches, crossing lagoons and rivermouths like the Surfline.

Hey, Nate. My name is Luciano and I found your blog by sheer accident. See, I'm from Mazatlan, Mexico, and belong to a family of railroad workers for 3 generations, since the Sud-Pacific line was thrown along the Pacific Coast. I myself was a railroad worker for a few years but had to change for something more solid then. I'm happy to see pictures of the Ferromex trains. One of my younger brothers is an engineer. He travels from Guadalajara to Manzanillo, Aguascalientes and San Blas, depending on the needs from Ferromex. I'll be looking for your future posts. May you have a happy new year.

Hi, my name is lyn. I live in the U.S. but plan to visit areas in North West Mexico around October. You seem to be very informed about trains in the Northwest. Do you know if there is rail service in that area, Sonora, Sinaloa and Nayarit? Or, if you have a link providing that information it would be highly appreciated. Thanks

Hi I took the train from Mexicali to Mazatlán back in 1969. It was my first trip to Mexico. It cost around $12...when it stopped at some stations there were food tables lined up along the tracks. I had a great trip, everyone was very friendly(I was 19), I sampled everything, and after a week in Mazatlán I was sicker than a dog. Had to take the bus all the way back North. What a trip. No way I'd do it now.

I took the passenger train once, from Mexicali all the way down to Mexico City, via Guadalajara. It was the train trip of my lifetime, never to be forgotten. The train even had a dining car. At stops along the coast villagers would come sell seafood dishes at the stations.

I took the Mexicali to Tepic twice back in 1968&1969. 5 guys with surfboards..we had to cut our hair to
enter Mexico. It was the trip of a lfetime as said before. Have never forgotten the sweet corn tamales sold by vendors at the Guymas stop.

This site brought back a lot of memories. We took the train from Mexicali to Mazatlan in 1961, second class. All night, all day, and arrived about 3AM in Mazatlan. The trip of a lifetime. If the train still existed, I would do it again in heartbeat. but this time, first class! \;-)

I will recommend anyone looking for Business loan to Le_Meridian they helped me with Four Million USD loan to startup my Quilting business and it's was fast When obtaining a loan from them it was surprising at how easy they were to work with. They can finance up to the amount of $500,000,000.000 (Five Hundred Million Dollars) in any region of the world as long as there 1.9% ROI can be guaranteed on the projects.The process was fast and secure. It was definitely a positive experience.Avoid scammers on here and contact Le_Meridian Funding Service On. lfdsloans@lemeridianfds.com / lfdsloans@outlook.com. WhatsApp...+ 19893943740. if you looking for business loan.